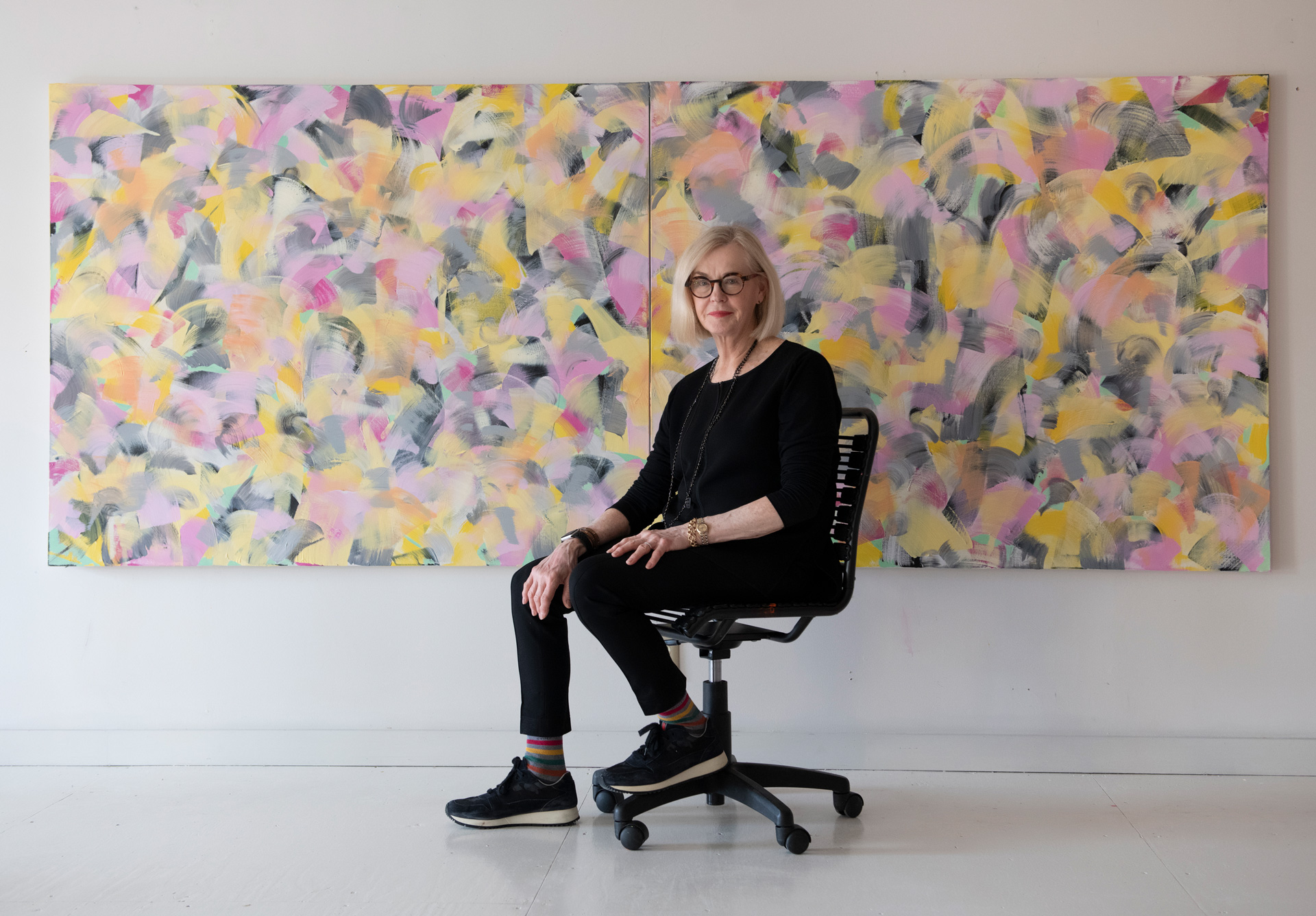 Over the course of my career, I have worked with bronze, glass, paper and paint.  In each material relationship, there is a question that I am pushed to ask both myself and the material—“How can this interaction deepen my understanding of the larger moment?” Due to this specific exploration, my work is largely autobiographical, an improvisational conversation between environment, material and body. Each piece begins without preconception of the outcome, only with an effort to express the internal.

Currently, paint is a medium that feels closest to the body; when I paint, my hand has a direct role in constructing a visual reality. It is a poetic and liberating interaction, one that allows me to create and manipulate environments and our physical relationship to them.  While these paintings are very rooted in my own experience and material relationships, the use of color, gesture and marks all contribute to abstract pieces that are meant to engage each viewer uniquely, in the context of their own moment.

Past works were about relating the natural world to the constructed world, juxtaposing nature with geometry, architecture and language. Within the last year, my paintings have been inspired by the political and cultural environment.  These current works are heavily process-centered—a meditation and reconciliation on unprecedented divisiveness, collective suffering, climate disasters and social outrage.  Many include multistage underpaintings with obscuring squeegee over-paintings. Some are directly gestural while others are more focused on patterning and mark making. The work embodies hope and optimistic faith in the cyclical nature of time.  As events continue to unfold and overlap, they continually change the meaning and visibility of these experiences. My paintings capture this evolution, challenging the viewer to engage with the tumult of life’s moments, interactions and observations.

Bronze, glass, photography, drawing, assemblage—Mary Chomenko Hinckley’s command of disparate media is so protean, it’s no wonder her career-survey monograph is entitled Material Evolution (Lucia | Marquand, 2018).  It may surprise longtime fans, therefore, that her latest migration is back to the artform that jump-started her life’s aesthetic trajectory back when she was 15 years old:  painting.  Her new works are nothing like the early, David Hockney-influenced portraits and landscapes she created in her early twenties or the mixed media she employed in undergraduate studies at Montclair State University, the School of the Museum of Fine Arts (Boston), and California College of the Arts, where she earned her M.F.A..  Instead, this fresh burst of painterly energy, dating from 2019 to the present, consists of vibrant abstractions brimming with gestures and compositional dynamism—and in every case a backstory behind the brushstrokes.  Although one could fully appreciate these works as pure abstraction, they are more than that.  They are abstracted narratives, each weaving a story with autobiographical, conceptual, or sociopolitical import.

The paintings’ titles offer clues to the deeper undercurrents flowing through them.  The latticework of blue and yellow in a highly complex work, completed earlier this year, would seem at first glance an eye-boggling étude of moiré effects in the lineage of Op Art.  Then one sees the title, Ukrainian Diaspora 2022, recognizes the colors of the Ukrainian flag, and instantly infers a geopolitical backdrop.  If one is familiar with this artist from the monograph or her long exhibition history, one knows the basics of her personal history.  In 1949, her father and mother, Savelij (Sam) and Tatjana (Tanya) Chomenko, emigrated from Ukraine to the U.S., along with her maternal grandparents and aunt and uncle, fleeing the destruction caused by World War II, the horrors of life under Stalin, and the famine of 1946/47.  Hinckley was born two years after her family arrived in America, and with Ukrainian the only language spoken at home, she did not learn English until kindergarten.  In those dark days of McCarthyism, it was hard for her not to feel an outsider, as teachers treated her with suspicion and prejudice, assuming the family must be Communist.  Her parents did not talk about the atrocities they endured in the old country, and it was not until 1977, enrolled in a summer Ukrainian Studies program at Harvard University, that she finally learned the essential truths of her heritage.  You would not necessarily infer this rich tapestry of embedded context simply from beholding Ukrainian Diaspora 2022 on the wall of a gallery or museum, but oh, what gifts these paintings bestow the more you learn about their meanings and maker.  They reward the delving-into, the repeat viewings, the introspection they inspire as one by one, like an onion’s scales, the layers of nuance peel away.  To befriend them is an act not only of familiarization but also of excavation.

The Ukraine painting offers a telling encapsulation of Hinckley’s broader modus operandi.  An inveterate traveler, keen observer, and empath possessed of indefatigable optimism and intellectual curiosity, she channels her wanderlust and emotional availability into her paintings.  Nothing is too majestic nor too intimate to be transliterated into art:  the nature of time and déjà vu; a recent expedition to Antarctica; the ups and downs of her children’s personal relationships; the changing of seasons in the Pacific Northwest; the music of Bob Dylan; the joy of snorkeling with multicolored fishes; the possibility of parallel universes; and the question of what we leave as our enduring legacies.  Many of her pieces are topical.  In Variant 1/Vaccine/ Variant 3, she addresses the frustrations and hopes of the Covid-19 lockdown.  The death of a beloved and unifying Supreme Court Justice is the subject of RBG in a Divided Country; the end of the Donald Trump presidency and the advent of a more integral era in Seeing Light; the decimated forests and acrid smoke of the summer of 2020 in Obscured by Wind and Wildfire; and the murder of George Floyd and the specter of police brutality in I Can’t Breathe.

This last piece is rare in Hinckley’s oeuvre in that its grim subject matter is echoed directly in its somber palette.  Far more often she finds the silver lining that alchemizes even the grayest cloud into cause for hope.  That orientation toward positivity manifests in a galvanizing palette of primaries and pastels; in kaleidoscopic, densely packed gestures that fit together in intricate mosaics, reminiscent of the Impressionists and Pointillists; and bold, squeegee-smeared ripples of chroma and impasto in homage to Gerhard Richter’s Abstraktes Bild series.  The compositional density is endemic to her signature style, the gestures discrete, cellular, and rhythmic.  There is a sense of mathematics and accumulationism, microcosm depicted in relation to macrocosm.  Inspired by Bachelard’s The Poetics of Space, she sometimes forces that perspective by framing two canvases together, one composition more compact, the other more spacious, as in a ratio, a scale shift analogous to logical/intuitive, explicit/implicit, left-brained/right-brained.  Such paintings may be seen as epistemological diagrams exploring perception, guiding viewers to consider physical and philosophical relationships.

Although much of her output has conceptual underpinnings, she explains that “For me, painting is very direct:  gesture, color, immediacy, and the ability to keep transforming.”  The paintings have an immediacy of surface, a luscious texture that looks powdery, velvety, luxuriant.  Together with their chromatic exuberance, these surfaces appear alive—jostling, quivering, sensual.  She thinks of them as “my autobiography of this time,” and indeed, they are dually episodic and diaristic, journalistic and editorial.  They are tools toward “metamorphosis,” she observes.  “I wind up feeling optimistic through the act of painting.”  Perhaps counterintuitively, one of her guiding artistic lights is Max Beckmann; another is Barbara Kruger—both artists who are able to transmute dark or controversial subject matter into narratives with formal elegance and a kind of sublimity.  This is Mary Chomenko Hinckley’s synthesis as well:  an abstract language deployed toward personal storytelling.  In her hands, a paintbrush confides and confesses, acrylics speak and sing, and the canvas becomes a paean to the histories and mysteries that inspire this restlessly creative, ever-searching artist.

—Richard Speer is an American art critic, curator, and author whose reviews and essays have appeared in ARTnews, Art Papers, ArtPulse, Art Ltd., Visual Art Source, The Chicago Tribune, The Los Angeles Times, Salon, and Newsweek.  He has authored more than two-dozen books, among them “Halley/Mendini” (Mary Boone Gallery), “Eric Wert:  Still Life” (Pomegranate), “Tom Cramer:  Journey into the Fourth Dimension” (Jordan Schnitzer Museum of Art), and “The Space of Effusion:  Sam Francis in Japan” (Scheidegger & Spiess).  He has curated exhibitions in Oregon and California, including the forthcoming “Sam Francis and Japan:  Emptiness Overflowing” at the Los Angeles County Museum of Art, which will run April 9-July 19, 2023.  For more information, please visit www.richardspeer.com.